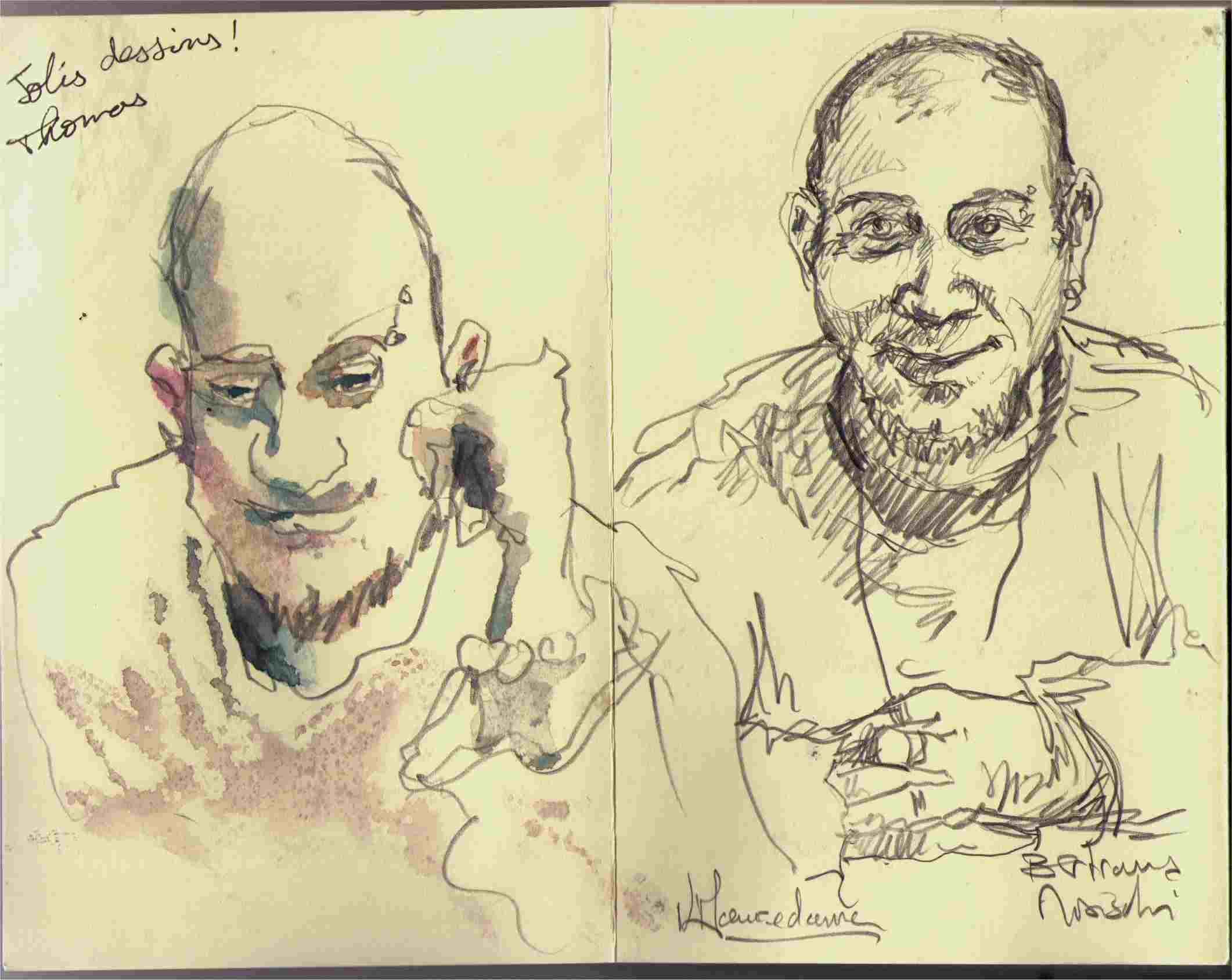 To
Ifav,
and all
people who
make me possible
to come to Clermont
living for 3 days
in the fullness
of art

I was born in September of 1976, the 13th , and since a child I love the art, drawing, painting, making models. Fortunately both my family and teachers always encouraged me to practice such activities.

I had got an MA2 degree in Egyptology at University of Pisa in 2004, and one year later I’ve started to study for a second MA2 in Digital Humanities, discipline where computational is applied to human sciences: such experiences confirmed me about the importance and ever-growing use digital instruments applied to artistic, linguistic, historical and literature domains. The encounter with Professor Roberto Rosselli del Turco initiated me to the text digital encoding.

After the travel of 2005 in China, I start to study the Chinese Calligraphy, which I use to practice yet today among the study of Chinese Language. Moreover I start to study the Sigillography and the traditional Chinese Art, adopting watercolor and crayons as my mains medium for my Carnet de Voyage, while I prefer the oil medium for paintings of wider dimension and different approaches.

About my way of oil-painting, I feel I had two main encounters which mostly influenced me: first of all the style which I use to call “neo-impressionist” of the American Cape Code School of Art, founded by Master Charles Hawtorne and pursued by Lois Griffel. Then the discovery of Sennelier oil pastels, with a so peculiar unctuousness and creamy texture which permitted to me a wider freedom of pictorial expression.

During my travels in Chine I had the possibility to visit the city of Lijiang, a little center situated on Tibetan Plateau; here I met the Naxi People, one of the many official ethnic minorities of China. I thus began to study their ancient culture, founded on the “Dongba” religious tradition, and their pictograph writing system (the only one alive at today…) which me greatly wondered.

My studies focused on Naxi – Dongba tradition thus began to be appreciated by specialists and scholar, as I was invited to expose some research project in China (Kunming 2009) and in France (Pris 2007, Arras 2010).

As I’m living and working in Florence ‘till 2004, as often having the possibility to go to Paris and Beijing for my researches, I could appreciate and study the greatest  master-works. In China I had the possibility to meet the opera of both traditional painters as  陈容 Chen Rong (1235–1262), 石涛Shitao (1642-1707) e 八大山人 Bada Shanren (1626-1705), and as contemporary painters as徐惟辛 Xu Weixin (1958 ) and关则驹 Guan Zejiu (1941).
In 2007 I’ve frequented the Art-Atelier of Marzia Pieri, when I could delve into the colored crayons; in the same time I started to deepen the painting by watercolor under the guide of Master Azad Nanakeli, who delighted with his unique style of using colors “very grind”.

Finally, meeting Stefano Faravelli, at the beginning just by his Carnets, then pursued and matured when I had the possibility of working with him in the summer of 2010 in Riomaggiore, and other meetings culminated with the Rendez-Vous du Carnet de Voyage in Clermont-Ferrand, into the November of 2011. The precious friendship with Master Faravelli influenced me enormously, especially in the way of conceiving my Carnets, and in the deepness and total self-immersion into the the Carnet itself; I thus began to consider and realize not just Carnet de Voyage, but also Carnet of study, alias monography-Carnets focused on one or more thematics, as the Carnet dedicated to the Egyptian Western Desert Caravans Routes, or the one dedicated to The Scroll of the Nine Dragons, a deep study and a copy of the masterwork of 陈容 Chen Rong.

During the preparatory for the XII Rendez-vous of the Carnet de Voyage, thinking about how to set up the stand, Claudia and I could simulate the disposition and the setting-up thinks to the accurate documentation sent by Ifav (Association Il Faut Aller Voir). An idea lightened in my head, and it seemed suited: make a Carnet available to people who would passed by my Stand, free to any initiative wished by every guest and passerby.

The leaping idea immediately self-transformed in a more articled and intense project: at first, the perfect support for this kind of guestbook had to be a Japanese Moleskine, then it would be possible to unwind such memory of our first Biennale, as a sequence of images and colors which would permitted us to travel, even if sitting at my Stand, letting people to take me where and how they would.

Days and sad daily-life passing by, I then started to conceive this idea as a need of expression: I would that people passing-by my stand could get an impression of myself, and then desire or not to make something on my Moleskine. I wish that people could touch a foot-step of my person, and over there embroider what they would like to do.

Here then spread out the first plate of my Livre d’or dedicated to 2011 Randez-vous: Sofia Brugnatelli gently blow over the Hokusai’s floating landscape, and papers and hats fly away together with the guy sit on the flying-open-book (logo of Ifav), exactly as Sofia was, a girl who learned to fly immersed into literature and writing, everything while I, from Florence, pilgrim to Clermont-Ferrand, and in the meantime Claudia looks at the sky, and at the papers that like thoughts are flying away.

Soon Claudia’s beautiful hair became blue waves whiping out in white foam, and yet again beloved Hokusai backs with his marvelous waves outlining and foaming into the deep blue sea, the same sea which Sofia used to chant smelling its perfume: I remember her, and the other people could read about in her “Costruisci il tuo Totem (build your totem) ” . It is the same sea which Claudia loves, the same sea and the same waves which myself, as a child, used to surf  skiving the scholl, sensations that thanks to the “Drifter” Rob Machado I could  relish again in their real essences.

From the coverpage of “Gli Ulissi Ebrei”, collection of the writings of Sofia Brugnatelli, I took little paper-cuts in which appears the inscription “per sempre (for ever) ”, and the initial glentle blowing make the paper-cuts to spread out all over the Carnet…, for ever!
The essence of this Carnet, the nature of mine and I believed somehow of any Carnettist really deepen in such paper-caskets, takes me thinking about the “self-making” of a Carnet de Voyage, and linked to the novels of Jean Pierre Faye and his conception of literature and novel: immediately I bud on the Carnet excerpts of his masterwork “Le Recit Hunique”, part of  the envelope of letter he wrote to my mum at the time when she was translating his romance “La Cassure” as her degree in French language and literature. I also cut parts of a handbill which Faye himself sent to my mum about the collective movement “Tel-Quel”; I desire to deep my Carnet in the deepest and most intimate corner of my heart and loves: tel quel!!!

Everything then was made by itself, with signatures, dedications,drawings and little masterworks. Among them I love to look and look again at the Poisson du Pacifique squirmed from a Carnet Marin of Madame Marie-hélène Puget, the “Trabocco” of the friend Marco Pallini Palmar, the black pattering kitty of Laure Fissore, and the splendid lobster of Stefano Faravelli, the most Taoist creature among all the animals, master of the walking-back, as he had written, transparent as I am… Tel Quel!

“ TEL QUEL is the first wide review exclusively directed by young writers. It yelds a new critic point of view about literature of yesterday and of today. It’s orienting the literature of tomorrow. “

[pg. 10, 11]
Up: frontispiece of envelope, autograph sender is Jean Pierre Faye writing to Paola Farulli, my mum, during their correspondence for my mother’s translation of Faye novel “La Cassure”.

Down: Jean Pierre Faye, 1967 “Le récit hunique”, Collection “Tel Quel”, aux éditions du seuil: from the back cover-page. For English translation, many thanks to Carl Freeman.

“ Presenting these freely improvised texts together is justified if they complete each other and, in particular, form an original pattern.
Here, extended story-telling may be seen developing, the gradual progression of writing: discovering and reacting.
Their final hostelries, their random staging posts, are named Sartre, Charles Sorel, Nouveau Roman, Jakobson, or Artaud.
The Huns arrive and, believe it or not, they make their entry through language or story. But what matters is what emerges from that. ”

My totem rises-up behind the Tyrrhenian Sea, where the fisherman’s boats landing decoying flocks of white seagulls. Their calls echoing in the whole city of Livorno, their wings making the most of Sirocco’s  draughts and their clumsy figure alight on the shoulders of the Four Moors (a monument with four Saracen pirates enchained by Leopoldo Duke behind the Medicean harbour of Livorno)
There will be right the center of my universe, it will real be that site to determinate my space: leaving from the bronze brocade skirt I’m leaving from home.
If I half-close my eyes and I look-back my shoulders I see the gloomy of my eyelid slowing turning into blue. Dribs and drabs the colored platform is moving, ‘till is resembling the sea.

[13]
If I should divide my life and looking for a symbol to be linked to a moment, the first one could be the sea.
Then the totem could begin to take form and, at the place of the buffalo muzzle, would appear a sea-water bottle. I believed that the sea had seen me grow-up; I used to take a rest sitting astride on the legs of the Saracen pirates, staring at the waves: they were rushing rising-up, whiping-out against the dock turning themselves into foam. The scent of  seaweeds and fishes was sharp but infinitely cheering.
When I was a child I used to feel the champion of a not-considered freedom, I was the spokeswoman of the Moors: at heart

[14]
I liked their tale of beggars framed-up by the great hero Leopoldo, but the end with their death was disappointing.
In my tales I was able to save them, because as I am a sea-creature in the under-water city where I was living, there was a place also for the beggars. Their mouths didn’t answer to me and their proud faces cried, but I didn’t miss any opportunity to rescue them telling that sooner or later something have to change.  Growing-up, I just used to sit on the stairs, at their feet, and from there smelling the sea.
Under the sea-water bottle there are the Saracens.

[15]
Then a train took me away from my totem, thus carrying on the building was definitely a problem, but many years of my life could be summed-up by just one headword: a ball, more exactly a Mikasa volley-ball. By it I’ve learn how to live, forgetting the past with sadness, rising-up my head and going on. By the ball I’ve learned that if  we don’t play in team we cannot win; sport is able to absorb myself like a pleasant grip, offering many emotions and the power for struggle.
Under the Saracens an empty space means sadness,  homesick, melancholy, and lower a ball, more exactly a Mikasa.