This short draft is taken from CL.A.U.D.I.A.’s intro page and it is focused about a peculiar approach to semantic annotation of Dongba manuscripts by NSM primes as mark-up tagger.

The NSM theory known as “Natural Semantic Metalanguage” has been developed by A. Wierzbicka and, later, by C. Goddard and other scholars.

The “basic idea is that we should try to describe complex meanings in terms of simpler ones. For example, to state the meaning of a semantically complex word we should try to give a paraphrase composed of words which are simpler and easier to understand than the original. This method of semantic description is called reductive paraphrase. It prevents us from getting tangled up in circular and obscure definitions, problems which bedevil conventional dictionaries and other approaches to linguistic semantics. No technical terms, neologisms, logical symbols, or abbreviations are allowed in a reductive paraphrase – only plain words from ordinary natural language.” (NSM Semantics in Brief: http://www.une.edu.au/bcss/linguistics/nsm/semantics-in-brief.php → 2009, June 28th )

By reductive paraphrase is thus possible to proceed as method for meaning analysis, which conduces to every language’s “semantic core”, “ a language-like structure, with a lexicon of indefinable expressions (“semantic primes”) and a grammar […] governing how the lexical elements can be combined ”: in other words a “mini-language” as expressive powerful as full natural language.

Semantic complex concepts thus could be explained by reductive paraphrase method, for instance a pair of samples from Wierzbicka 1996: 251-253; Goddard 1988):

Anna Wierzbicka aiming always to reduce the terms of the explications to the smallest and most versatile set by experimentation: she thus identified a core of 60 semantic primes (Goddard & Wierzbicka, “Meaning and Universal Grammar”, Eds 2002)

Semantic primes like I, YOU, SOMEONE, SOMETHING, THIS, HAPPEN, MOVE, etc.., identifying simples and intuitively intelligible meanings, are essential for numerous other words meaning explicating and non-circular grammatical constructions.

According to Wierzbicka, English core at today consists in:

Such primes are could well been implemented as Xml well-formed tree, constructing a NSM ontology skeleton, as exemplified below: 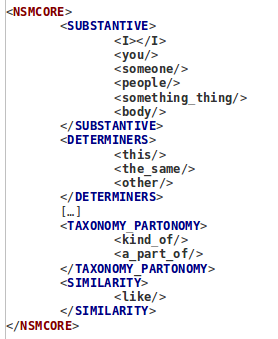 Such sample represents a very basic approach to Dongba pictographs NSM mark-up I am working over.

NSM studies have been carried out in a wide range of a languages, including English, Russian, French, Spanish, Polish, Italian, Ewe, Malay, Japanese, East Cree, Chinese, Mbula, Yankunytjatjara, Arrernte, and Maori, among others.

Considering Naxi language and Dongba pictograph writing system as close and strictly linked – but independent phenomena, my aim is to study by NSM approach Naxi and Dongba for:

This TEI – Xml page is dedicated to Iconography and decorations study in my work dedicated to Leabhar Cheanannais.

As first I mean to introduce some decoration motifs of Kells and its artistic background to identify patterns, motifs, styles, influences and inspiration: ornaments repertoire employed in Leabhar Cheanannais had long been in development in manuscript art and applied crafts. 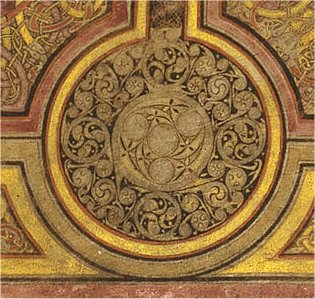 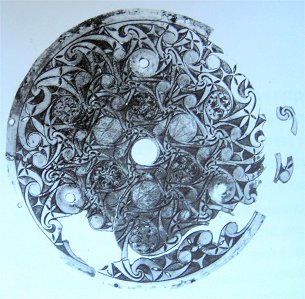 Leabhar Cheanannais study are going to be update often and many corrections in TEI encoding will birth as soon as I can. Next step will be encoding of a full text page with capitals miniates as experiment of complex TEI encoding implementation.

Process of capitals letters encoding with entity declaration could be as complex as Dongba pictograms encoding by entities declaration in TEI header.